The world of whisky is getting wider

Some of the world’s best whiskys are made in…Japan? The Land of the Rising Sun is becoming a big player on the World Stage of Whisky.

Image from Sydney Bar Week // The Land of the Rising Sun is becoming a big player on the World Stage of Whiskey.

Japan. Home of beautiful sights, awe-inspiring history & culture, and award winning whiskey tradition. You read that right. Japan is becoming a big player on the world stage of Whisky.

Japanese Whiskey has been growing in popularity in the U.S. over the last few years, and we can see why. Americans love whiskey! Our thirst for bourbon and whiskey is a powerful one, and it is also an expensive one.

Prices for Japanese whisky run the gamut from anywhere around $20 bucks a bottle to close to a couple grand. A bottle of 1960 Karuizawa whisky sold at a Hong Kong auction for $118,500 last August.

If you want to jump into the world of Japanese whisky without taking a chunk out of your wallet, Suntory Whisky Toki is a great start. This whisky is 1) widely available state side and 2) under $40 depending on where you live (We can get it here in NC for $30 plus tax). This light golden whisky is subtly sweet with a spicy finish, and has notes of honey and vanilla. Suntory Whisky Toki can be enjoyed neat or try it in a cocktail like a Highball or Whiskey Sour.

Like single malts? Give Hibiki Japanese Harmony a try! The Hibiki is a light, young, blended whisky that is aged in Mizunara Japanese oak casks. It is easy to drink and has a subtle spiciness of cinnamon and clove. The sweetness of this whisky makes it a little more approachable for new Whisky drinkers, but it could be a little too sweet for some folks. It is definitely a decent introduction to the Hibiki blends.

Matured in sherry wood you say? Sign us up. The Taketsuru Pure Malt is a blended malt whiskey that is aged about 10 years to give it a smooth, rich, and clean mouthfeel. The whisky has just the right amount of sweetness from Sherried fruit, but not a lot of smokiness. It has a fruity richness that lingers in your mouth with a slight touch of Espresso flavor. This is one of our favorite whiskies to splurge on so far.

Fans of smoky whisky, I think you might find Hakushu 12 years old to your liking. They call Hakushu a “green and fresh” whisky, and it is very much a spot-on description. This whisky has a pleasing aroma that is reminiscent of the forests of its birthplace. It has more of an herbal palate with just a touch of fruitiness, and it has that smoke you expect from a good whisky. The Hakushu 12 year is one of the best Japanese Whiskies you can get under $100. Be prepared to fall in love with this whisky.

Yamazaki is the number 1 single malt whisky in Japan for good reason! This whisky gets a lot of its character from the use of vanilla, citrus fruits, and Mizunara oak. Yamazaki 12 year is a light bodied whisky that is comparable to a fruitier Highland whisky. It is worth a taste if you can find it near you.

We absolutely love these whiskey cocktails, and you should too!

Image / Recipe from // Brio Drink of the week

If you’ve never had a whiskey cocktail before, a whiskey sour is a great place to start. It’s a great blend of whiskey, lemon juice, and a bit of sweetness that you might be looking for in a good cocktail. Americans have an almost natural affinity for good whiskey, which is why we have a long history with the stuff. The Whiskey Sour shares a common history with the Gimlet on the high seas when scurvy was common among sailors. American sailors would put lime and lemon juices in their whiskey to prevent vitamin C deficiency. It was bartender, Jerry Thomas who later would refine the recipe to the classic whiskey sour that we know today. Egg whites were not introduced until later to add a frothiness to the cocktial, but it always remains optional.

How to make a Whiskey Sour

Add the whiskey, lemon juice, and simple syrup to a Cocktail Shaker with ice. Shake together. Fill an old fashioned or rocks glass with crushed ice [regular ice works too]. Strain over ice, and garnish with a cherry. 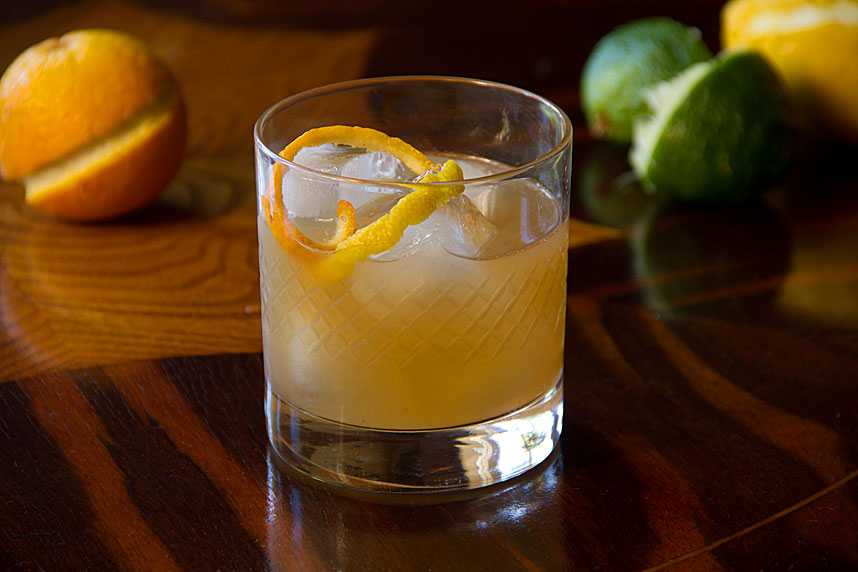 If you are a fan of an Old Fashioned, then the New Yorker is right in your wheel house. Like it’s cousin the Manhattan, the New Yorker falls into the class of whiskey cocktails that got its name from the Big Apple. New Yorkers must really have a thing for whiskey.

How to make a New Yorker

Pour whiskey and lime juice over ice in an old-fashioned glass. Add sugar and grenadine syrup. Stir together, and garnish with the twist peels.

Closely related to the Horse’s Neck and the Presbyterian, the whiskey ginger is a two ingredient cocktail that every whiskey lover has probably had in some way shape or form before. It’s because the cocktail is so versatile. There are many versions and off shoots of it. This recipe from Jameson Whiskey is called the Jameson Ginger and lime. You’ll want a good quality ginger ale if you want to stick to the recipe and use Jameson Whiskey. Blenheim is a good choice. We don’t know why ginger ale and whiskey came together, but it’s been a happy marriage.

How to make a Whiskey Ginger

Add ice to a Highball glass, and pour in whiskey. Top with ginger ale. Squeeze the lime and pop it into the drink.

Image / Recipe from // Brio Drink of the week

This cocktail is great for our Jameson lovers out there. The Irish Redhead has a flavor palate that is similar to a Whiskey Ginger. You could even substitute the club soda for ginger ale if you want a spicier kick. After all, whiskey and ginger are kind of a match made in heaven.

How to make an Irish Redhead

Fill Scotch glass with ice as desired. In a mixing glass, mix together Jameson, grenadine, and lemon and lime juices. Pour into the glass, and top with club soda or ginger ale. Add a cherry on top.

As far as whiskey drinks go, this one has a name worthy of some intrigue. The recipe was the brain child of Dan Saltzstein, and later named by Michael Y. Park – who should name all cocktails for now on. This cocktail pairs rye whiskey with Averna amaro, and Italian liquor that has citrusy herbal notes. You are in for a treat if you’ve never had the chance to try it. In Dan’s recipe, he suggests using Old Overholt rye whiskey. Old Overholt is one of those “bottom shelf” whiskeys that you hear a lot of good things about. It’s not bad for the price tag, and if you don’t end up liking the Witty Comeback, it tastes good with ginger ale.

How to make The Witty Comeback

Combine rye, Averna, lemon juice, and ginger simple syrup in a cocktail shaker. Fill shaker with ice. Shake about 30 seconds. Strain into a coupe glass or a old-fashioned glass filled with ice and garnish with orange twist.

The citrus twist of this Drink of the Week, The Irish Buck, is sure to put a bit of a Jig in your step.

Whiskey and Ginger Ale have had a casual love affair for such a long time, that many Irish Whiskey distillers have put their name on this spicy flavored classic.

As part of the Buck family of cocktails, which is mixed with ginger ale or beer and citrus, the Irish Buck is a smooth mixture of Jameson, ginger ale, and lemon juice that is sure to be a crowd-pleaser.

Now let’s show you how you make an Irish Buck!

The Irish Buck: Add ice to glass until about 3/4 full. Pour whiskey, ginger ale, and lime juice over ice. Stir together, garnish with lime wedge. Enjoy!

Winter wouldn’t be the same without a Toddy

This Drink of the Week entry was inspired by Epic Tea Time with Alan Rickman, and in honor of the late Alan Rickman. He will be missed by so many, Always.

Curling up with a nice Hot Toddy is one great way to beat the cold this winter, and to watch your favorite Harry Potter movie(s). It is also a favorite cold remedy for its soothing effect on those who are feeling achy and congested.

In fact, hot toddies have been used for decades as a folk remedy for the common cold. Why you might ask? Well, alcohol dilates your blood vessels, making it easier for your mucous membranes to fight off your cold/infection. Combined with the steam power of hot tea, lemon, and honey you have a deliciously sippable decongestant.

Hot Toddies have been a family natural cure-all for generations. My mom makes these whenever someone in the house has a chest cold or a sore throat. It’s kind of like magic. The tea warms you up while the honey and whiskey soothes and helps you sleep.

According to the Hot Toddy experts, the type of whiskey you should use depends on your symptoms: Use bourbon if you’re just treating congestion or a sore throat, or use Irish whiskey if you have a persistent cough.

I prefer my hot toddies to be made using a strong black tea. Irish or Scottish Breakfast tea is heaven with a splash of Jameson, but Earl Grey makes a good choice as well. This is just my go to, but many types of tea pair very nicely with Whiskey. Ginger tea adds an extra spice palate to the mixture that will warm you up, especially when you pair it with an American whiskey.

This is how you make a fantastic Hot Toddy!

“The ones who love us never really leave us…” Rest in Peace, Alan Rickman.

Old Fashioned Hot Toddy: Bring water to a boil in a kettle, or place the mug in the microwave for 1 to 1½ minutes. Remove the water from the heat, and add in the tea bags. Allow the tea to steep for about 3-5 minutes, then add whiskey and lemon juice. Stir together, and add honey to taste. Enjoy!